[Dog-faced Atheist] Ask
Hey Sarah. I’m an atheist. When I finally come out to my friends about being an atheist and tell my religious friends that I respect their belief in God they like to dismiss what I am saying. It’s like since I don’t believe in God too that I am being immediately disrespectful of them. How would you respond to this situation?

It’s important to note the reaction many religious thinkers might experience at the discovery of your atheism. If you’re a former Christian or someone whom they believed to be a Christian, the immediate response might be one of shock, confusion, or disbelief. To deny acknowledgement of God could initially cause some believers to feel as if they are being told their belief is “wrong” causing their body language or conversation to inadvertently become more defensive or aggressive in order to regain their balance in the right. Your friends might not be dismissive of your atheism or respect; they might just not know how to respond or accept that belief initially.

Another unfortunate truth is that atheists are frequently portrayed like this: 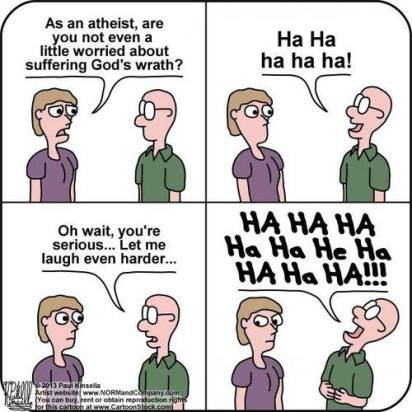 An even more unfortunate truth? This comic is being spread by other atheists who deem its contents as appropriate or amusing behavior.

The atheist in this comic is clearly not speaking to a friend. In four short panels, the cartoonist has successfully communicated a type of misplaced arrogance- an atheist who is being both inconsiderate and disrespectful in light of another person’s question, i.e. laughter in the face of concern and ridicule in placement of an opportunity for growth and understanding. Comics such as this one can cause believers to feel ridiculed and help perpetuate the stereotype that all atheists are rampant jerks.

“I respect your right to believe in God. I respect your decision to lead your life in correspondence with your beliefs. I simply do not subscribe to that belief system myself.”

Reaffirm your level of respect and  friendship with theists by communicating exactly what it is that you respect vs. what you don’t. Once these parameters have been discussed and defined, the issue of respect may dissolve with time and mutual observation.

There are always boundaries for respect, and everyone has the ability to cross those boundaries. Respect has to be cultivated. When it comes to friendships, it’s important to remember that friendships should be built on understanding rather than tolerance. Understanding and tolerance are not synonyms. Tolerance means just that, to simply tolerate something or accept its existence. The goal of a healthy friendship should be to understand the other person, to invest to him or her, corresponding belief system and all. You may not agree with those particular beliefs, but to commit to the journey of understanding is a sign of love.

Yikes. It’s always a good idea to be conscious about the language we use, especially in matters of division and while on the path to understanding. “Regardless” is a good word to leave at home.