World Book Night was a blast. I gave out copies of Michael Pollan’s The Botany of Desire. (This is my second favorite Pollan novel, preceded only by The Omnivore’s Dilemma.)

The book is sectioned into four topics: apples, tulips, marijuana, and potatoes. During the giveaway, we served snacks themed according to the book. Potato salad, apple juice, and caramel apple pie cookies. All that good stuff.

I re-read the passage about potatoes and the epilogue earlier this morning. I wanted to share a quote from the epilogue here:

“Sooner or later your fingers close on that one moist-cold spud that the spade has accidentally sliced clean through, shining wetly white and giving off the most unearthly of earthly aromas. It’s the smell of fresh soil in the spring, but fresh soil somehow distilled or improved upon, as if that wild, primordial scene had been refined and bottled: eau de pomme de terre. You can smell the cold inhuman earth in it, but there’s the cozy kitchen too, for the smell of potatoes is, at least by now, to us, the smell of comfort itself, a smell as blankly welcoming as spud flesh, a whiteness that takes up memories and sentiments as easily as flavors. To smell a raw potato is to stand on the very threshold of the domestic and the wild.”

Pollan’s book could be considered an inspirational tool for the average gardener. (Last year, when I was angry at my corn for shading my squash, this would have been a good book to read. An anecdote for the frustrated or tired.) This book makes me think about our distinctions between wilderness vs. nature and the Apollonian vs. the Dionysian. The way The Botany of Desire speaks in conversation with literature alone is in itself enough to keep me reading and returning to Pollan’s work.

Check out World Book Night if you haven’t before! A number of my friends were givers this year, and I have loved reading the blog entries and social networking updates today about the strange and fulfilling encounters people have had while emptying out their giver’s box.

– Michael Pollan’s subtitle for The Botany of Desire is “A Plant’s-Eye View of the World.” Write a short piece of fiction or poetry from the perspective of a plant. You may use one of the plants mentioned in Pollan’s novel (apples, tulips, marijuana, or potatoes) or choose your own.

– Pollan spends a large portion of the first chapter discussing the tale of Johnny Appleseed. Using the Johnny Appleseed legend as a model, write a similar story involving either tulips, marijuana, or potatoes.

– The third chapter of the novel begins begins by comparing the Genesis account of the apple’s “forbidden knowledge” with the contemporary forbidden nature of marijuana. Pollan concludes this first section with a method of questioning:

“Why in the world should this be so—why should evolution yield plants possessing such magic? What makes these so irrestible to us (and to many other creatures), when the cost of using them can be so high? Just what is the knowledge held out by a plant such as cannabis—and why is it forbidden?”

Write an essay comparing two forbidden topics, practices, objects, etc. while performing a social critique. (Or take two ordinarily accepted practices and make them forbidden.) The social critique should unfold naturally in your writing. Use Pollan’s questions to help guide the essay.

To those who asked for prompts, I hope these are somewhat profitable. I want to extend my gratitude to all who helped make World Book Night a success in Clarksville. Happy reading and writing, folks!

Day 3: A Step Into The Past
This day we will visit the past for a little bit and find something positive. It can be an event such as a concert, going on a trip, spending the day with someone you love, someone (famous or someone you know) that was a positive influence on you as a child.

I remember the day we brought Bandit home. It was during summer, right around the time of my father’s July 4th birthday, just weeks before the school year. The pup rode in the back compartment of a Chevrolet S-10 between the feet of my little brother and me. My father thought up names and tested them out loud while driving and told stories about old dogs with good names. “All purebred dogs have three names,” he said. 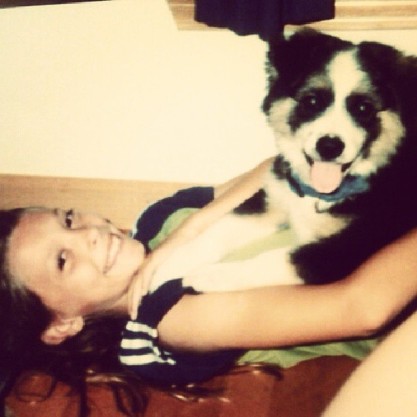 We bought Bandit from a farm owned by the Houser family. My mother worked at FedEx as a manager, and one of her drivers mentioned that his dad had some Australian Shepherd puppies for sale. There were so many dogs that I came home with tiny holes around the ankles of my jeans. Amidst the writhing red-black-blue fur, the two-toned eyes and bobtails, we found him. Bandit was not my first dog, but he was the first one I ever cared about. He felt like mine.

Day 4: Best of 2013
What is some of the best times you’ve had this year? What are some of your happiest moments of 2013? Feel free to post pictures on this day if you have any and you can share more than one thing.

Many of the happier moments experienced in 2013 have been shadowed by painful events. For example, I visited Boston for AWP with a group of students and  had the opportunity to attend a Celtics game. (They won in overtime.) A month later, the Boston Marathon bombings occurred. Similar circumstances have continued to form in lessening degrees throughout the year always casting a long and dark shadow behind them.

Perhaps my best moment as a reader in 2013 occurred when I stumbled across Simone de Beauvoir. Her book, She Came to Stay, was exactly what my summer needed. I was experiencing the tiring effects of East Tennessee sexism, and a French existential feminist made me feel understood.

Since then, Beauvoir has become a type of personal hero for me. I love it when writers sweep into my life the way she did. I feel a combination of wonder and anxiety at these discoveries of writers whose words keep me thumbing over page after page and longing to find a similar experience.

Day 2: Looking To The Future
Focusing too much on the past or future is never a good thing. However, it is good to visualize what you want in life, what you want to achieve, something you want to happen even if it is just a simple vacation. For this day, let’s look to the future for a few minutes and share what good, positive things we want in the future.

Next year, I hope to study abroad in Japan. If the trip makes, I will tour Shinto shrines (including the holy shrine at Ise) and Buddhist temples in Nara while also spending time in both Osaka and Tokyo.

Most of my travel dreams are centered around literature. When people ask me about my fascination with countries like Japan or Ireland or Russia, I am known to say something along the lines of: “That’s where the literature is at, man.”

One of my favorite fall events, The Southern Festival of Books, has come to another close today. I am sad to admit I was feeling sick for its 25th Annual Celebration, but going to readings and panels at the Legislative Plaza has become a cornerstone of the season— a time to see familiar faces, eat out of food trucks, and take pictures of mums. I wouldn’t miss it. It took some thought, but I finally figured it up; this weekend was my fifth year at the festival.

Kate DiCamillo, a children’s writer and novelist, was the first author I met in 2009. I asked Kate if she knew Margaret Atwood.

“Not personally,” she said.

“I think you two have the same hair stylist.”

Kate laughed and said nobody had ever compared her to Margaret before. She cupped her hand around the side of her face and with a playful look lingering in her corner of her eye said, “I’m honored.”

I’ve come to realize I say equally crazy shit to authors all the time.

I remember feeling cold in 2009. I kept wishing I had brought a jacket with me instead of my mother. I didn’t look at the author line-up or plan anything beforehand; I just went. I remember 2009 as the year I dumped books all over this deep-voice author, who I found out later was Silas House (and yes, I bought one of his books after that but was too shy to ask him to sign it— and yes, I’ll admit that I first read Silas out of apology, rather than interest), and as the year William Gay was sick and couldn’t attend his session.

I remember thinking William had seemed okay only a few months before. Later that night, I visited the Bluebird Cafe for the first time to hear Marshall Chapman play, and William wasn’t there either. I held The Long Home and Twilight against my chest and started to feel something like worry. I love going back to the plaza now and hearing strangers all around me talk about William, because when I am at the Southern Festival of Books, I can feel him there.

Today, when I drove to Nashville for the festival, I felt like aged whiskey. The parking garage was the familiar shape of a bottle. I knew which panels would have the best taste and burn the longest. I have met so many writers that the years run together. I like imagining the festival when it began in 1989 as being as beautiful and powerful as it is today, and I thank Humanities Tennessee for their dedication, and if nothing else, for putting up with us lot.